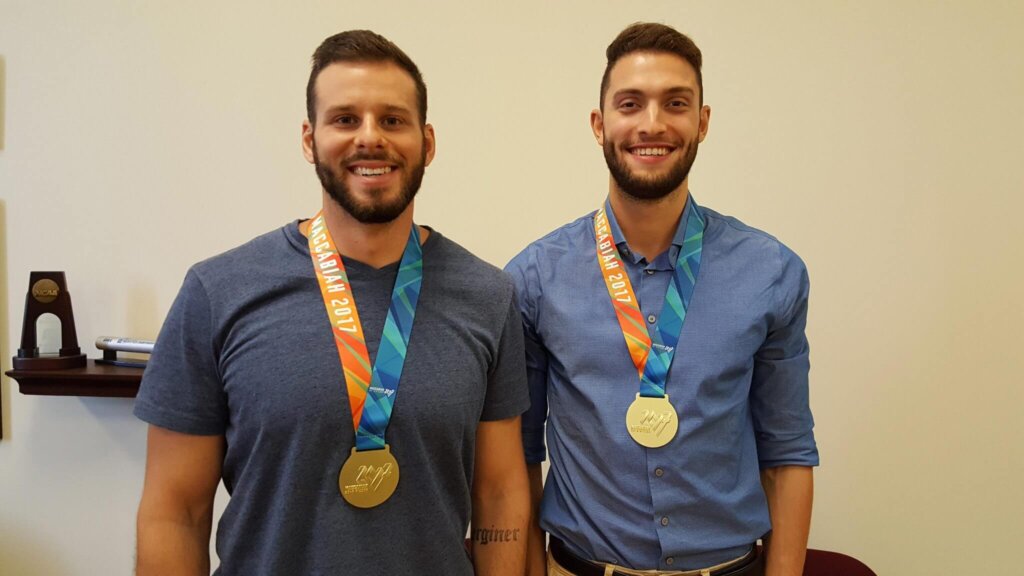 International students Daniel Bondarovsky ’18 and Gabriel Reis Levy ’18 may be gold medalists in volleyball, but they don’t let their love for the sport distract them from their main goal: getting as much as they can out of their educations.

Both men are natives of Rio de Janeiro, Brazil, and both are double majors: Daniel in accounting and international business (plus a minor in math), and Gabriel in marketing and social media. Both are also four-year members of the Blazer men’s volleyball team, having developed a love of the sport as tweens playing in the same club in Rio.

Daniel became so good, in fact, he received invitations to play at several Division I schools. “Huge schools,” he said. “But I didn’t want to be just a number. I wanted an environment where I would feel at home.”

“Clubs in Brazil, the environment is similar to Division I schools,” Gabriel said. “They want us to put sports ahead of studies. In my case, that was one thing that I was trying to get away from — for me, my studies come first.”

Daniel arrived at Elms first, having been recruited by volleyball coach Sheila Gisbrecht.

“One thing that made me feel sure of my decision was when I first met Sheila, when I saw her in person for the first time,” Daniel said. “She actually hugged me; she showed affection for me, like, as a family. And I felt like, ‘OK, that’s the right place for me to go.’ ”

Gabriel arrived one semester later with no previous experience of Elms, just the good things he’d heard from Daniel. With his schedule of six classes a semester, he was able to catch up and will graduate with Daniel in May 2018.

On top of academics and sports, both students have internships this semester. Daniel is working in financial operations and transportation at J. Polep Distribution Services. In analyzing several of their truck routes, he discovered the company could save money by combining two of the closest routes.

After a brief stint at a company that didn’t offer enough work to challenge him, Gabriel is spending the semester as an intern in the Department of Institutional Marketing.

There has been an adjustment from Rio, with its population of 6.3 million, to Chicopee at just under 56,000 residents, and they frequently get the same question from friends in Brazil as well as new friends here: Why Chicopee?

“I ask them the opposite, like, why not come here?” Gabriel said. “Rio is a huge city. I was trying to run away from all the traffic, from all the pollution, from those things that get in my mind and not allow me to be a good student in college.”

At Elms, “when I’m in season I can play and focus on my studies, and when I’m not in season I only study and get good grades, and that’s all that matters in the end,” he said.

The pair returned to Rio in the summer of 2016 for the unique opportunity of working at the volleyball competitions at the Olympic games, thanks to a friend’s father who had a video production company.

“We were working as playback operators,” Gabriel explained. “We would assist the video director to display different images, graphics, videos, songs in the Jumbotron of the volleyball arena.”

They worked at the Olympics for 20 days, with three or four games a day. “It was an amazing experience, a once-in-a-lifetime opportunity,” Gabriel said.

In addition to seeing how a huge sports production like the Olympics comes together behind the scenes, the pair also gained valuable insights into their favorite sport as well.

“We watched many volleyball players; we could see them literally one foot away from us,” Daniel said. “It was like our idols were right there.”

This past summer, they even got the chance to play on a team with one of their idols, Brazilian national team member Marcelo “Marcelinho” Elgarten, who won a silver medal in the Beijing Olympics. Daniel and Gabriel played with him as members of the 2017 Maccabiah Games, an Olympic-like sporting event held in Israel every four years.

Both Gabriel and Daniel had played volleyball in the Maccabiah Games in 2013, but had placed fifth. This year was different: “We got the gold medal, which was the best thing ever,” Gabriel said. “We made history, because Brazil never got a gold medal, and I think Israel was undefeated in the Maccabiah games for the past 50 years.”

They so impressed the other team that the Israeli coach invited them to play professional there. “That was something big,” Gabriel said, “but I don’t feel that that would be the best choice for me. But I’m truly glad that I got my work seen by someone else and recognized by someone else.”

They both hope their experiences in Israel will translate to success for the Blazer men’s volleyball team.

Gabriel and Daniel are both student ambassadors for admission, and say it’s common for people taking tours of campus to be surprised that Elms has international students.

“It shows them that, okay, we’re small, but we have people from all over the world here,” Gabriel said. “What I say on every tour of mine is, ‘If you want to be a number, it’s not going to happen here at Elms College. You’re going to know everyone here on campus, and people are going to know you. And you’re going to have the support of literally everyone, from your coach to your professor to the director of the international office — everyone is here to help you.’ ”