College of Our Lady of the Elms is honoring Elizabeth Dineen ’77, J.D., the current executive director of the YWCA of Western Massachusetts in Springfield, MA, with the 2017 Sr. Margaret James McGrath Distinguished Alumni Award. 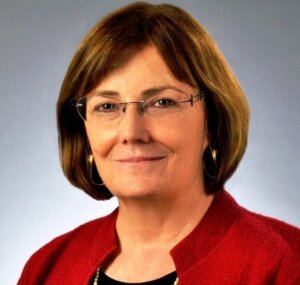 The award — presented annually to Elms College alumni who have made notable contributions in their lives professionally, spiritually, intellectually, personally, and through their loyalty to the college — will be presented to Dineen during the college’s opening convocation ceremony at 4 p.m. Wednesday, Sept. 27, in Veritas Auditorium.

The YWCA’s mission — “eliminating racism, empowering women, and promoting peace, justice, freedom, and dignity for all” — is consistent with that of the college. “Liz has used her Elms College education in a career of seeking justice for the marginalized members of our community,” Holland said.

In her relatively short time at the YWCA — she was tapped to take over as executive director in January 2016 — Dineen has engaged her professional network to add innovative and enthusiastic advisors and volunteers.

That professional network is extensive: Dineen has had a long career of community service. She served as an assistant district attorney for 25 years prosecuting child sexual abuse and rape cases, then entered an academic career as the director of the criminal justice program at Bay Path University.

Her legal career focused on helping the most vulnerable in our community, especially women and children who were the victims of sexually based and personal violence, and that focus has carried over into her work at the YWCA, which serves women and families at critical times in their lives.

Other honors Dineen has earned throughout her career include: the Governor’s Award for Service to the Commonwealth; the YWCA Woman of Achievement Award; Top Women of Law from Massachusetts Lawyers’ Weekly; the first Justice Kent B. Smith Award (2010) from the Hampden County Bar Association; the City of Holyoke: Mayor’s Certificate of Recognition (2004); and the Massachusetts Bar Association’s Access to Justice Award — Prosecutor of the Year (2003).

“I am fortunate to have had a life and career of public service all of which springs from the values of integrity, compassion and social justice that were fostered in me throughout my education at Elms College,” Dineen said. “The engaging classes that I had with Monsignor Thomas Devine (philosophy), Sr. Mary Murray (American history), Sr. Kathleen Keating (European history), Sr. Kathleen Reagan (sociology), and Sr. Kathleen Kirley (education) challenged me intellectually, and gave me a superb foundation for the study and practice of law.”