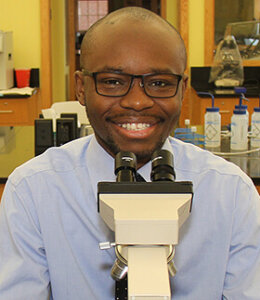 Postbaccalaureate premedical student Ibrahim Kargbo ’18 is a pretty quiet, laid-back guy. But then he heard that he’d been selected for a summer 2017 fellowship at the National Institutes of Health (NIH) in Bethesda, Md.

“I was in Chick-fil-A with a classmate, and I just screamed,” he said, smiling. “I never thought I would have a reaction like that to anything.”

His response was so strong because, months earlier, he had reached out to one of the researchers whose work he admired, John F. Tisdale, M.D., asking about internship possibilities.

After waiting to hear whether an internship was even a possibility and then going through the “grueling” application process, he found out last spring that he would be a fellow on Tisdale’s team in the NIH’s National Heart, Lung and Blood Institute (NHLBI). Tisdale has been working for years on strategies to cure sickle cell disease by replacing the bone marrow cells that give rise to sickled red blood cells with bone marrow cells from a donor who does not have the disease. Sickle cell anemia is a genetic blood disease that primarily affects African Americans and other minority populations.

The experience ended up being “a thousand times better than I expected,” Ibrahim said. “One thing I really appreciated about the internship is they really give you the support that you needed to learn on your own, but that the same time if you really don’t understand they expected you to ask questions. They really expected you to contribute to the overall research objective of the lab, even if you had never done research before.”

And he enjoyed it. “I definitely will have to incorporate biomedical research into my future medical training,” he said.

Because Ibrahim hadn’t done laboratory research before, he initially felt intimidated in the small, close-knit lab with postdocs, M.D.’s and Ph.D.’s from all over the world. But he realized that his studies at Elms had prepared him well. “[Elms] gave me really basic validation that I ended up building onto. You could really see the connection between a lot of the science and math material that we were being taught and how it actually applies in research and clinical medicine.”

His supervisors in the lab started him slowly, with tasks such as learning how to culture cells and how to prevent contamination. He gained confidence, and, impressed with his performance, the team soon assigned him an ambitious summer project.

“They wanted me to figure out if there was a way that we can differentiate or grow red blood cells in the dish without using feeder cells,” he said. Feeder cells provide growth nutrients and growth factors to red blood cells.

“We realized if we actually increased the concentration of a lot of the nutrients, or the cell factors, you can actually increase the differentiation [without the need for feeder cells],” he said.

A native of Sierra Leone, Ibrahim came to the U.S. when he was 5 years old. He attended George Mason University in Fairfax, Va., and graduated in 2010 with a degree in international health and policy.

“I’m the typical ‘first in the family to do X,’ ” Ibrahim said of attending college. His father, a grocery store clerk, wasn’t educated in the U.S. but has put Ibrahim and three of his brothers through college; his youngest brother is in middle school.

Having decided at that time on a career in medicine, either emergency or clinical research, he sought a postbac program to complete the classes he needed to take the Medical College Admission Test (MCAT). He came to Chicopee from a large school — George Mason has more than 34,000 students — and found that he appreciated the small size of Elms and the opportunities it gives students to work closely with faculty and classmates.

He is leaning toward a medical school that can provide that same experience.

“I was hoping that I could get into a big-name, Ivy League school, but I think going to a smaller medical school may be the best route for me,” Ibrahim said. He plans to take his MCAT in May and hopes to interview for medical school acceptance during the summer and fall. He would like to spend his gap year — the time between acceptance to medical school and the beginning of classes — working again in Tisdale’s lab.

“Because of the work that I did, and they said I was very eager and very willing to work hard, they would like me to go back,” Ibrahim said. “I think if I’m there for a year or more I could really get into the nooks and crannies of biomedical research and maybe even build on top of the project that I was working on.”

Whatever medical school he ends up at, his end goal is the same: to help the disadvantaged.

“My original motivation is to really help those who have been forgotten: the poor, the destitute,” he said. “There’s something about committing your life to serving the poor — it gives you some kind of contentment. You know what your purpose is.”