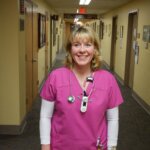 Even after 25 years as a practicing nurse, Ellen Beckwith still feels the urge to flip the script on occasion. The Lee, MA, local says that she was initially hesitant to pursue her bachelor of science (BS) degree, but after seeing several colleagues go through the RN-BS program at Elms, she worked up the courage to enroll herself. Ellen’s leap of faith ties back to her conviction that nursing is a profession that requires its practitioners to constantly strive for more.

“It took me 23 years to decide to go back because I didn’t really understand what the benefit would be,” she said. “For anybody who is debating going back, they really need to do it. Nursing is advancing as a profession, and we need to keep growing with it.”

Ellen explained that she chose the Elms RN-BS program not only because she is an alumna, but also because Berkshire Health Systems supports the program. As a charge nurse on the medical-surgical floor at Fairview Hospital in Great Barrington, MA, Ellen found it convenient to have class once per week for six and a half hours at one of her employer’s satellite campuses.

This type of continuing education is a win-win for nurses wanting to expand their skills. “Nursing itself is changing so much — I think we all need to be responsible for ourselves, and we need to stay educated and competent and knowledgeable,” she said. “I’ve gotten so much out of the program. I now see the wider view of the nursing profession and what more is out there for us.”

The RN-BS curriculum also pushes students to reconsider foundational concepts in nursing and examine them from new perspectives. In her statistics class, Ellen said that her instructor covered how to read and interpret journal articles, an invaluable refresher for nurses of any level. Her genetics and genomics class also made an indelible impression on her.

While she is perfectly content at Fairview Hospital, Ellen appreciates the confidence that the RN-BS program has instilled in her. “The program is opening other doors, too,” she said, “so if I decide I want to go into another position or do something in leadership, I have those opportunities now.” 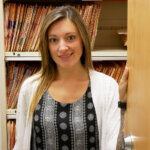 Applying to college can be a stressful experience, even for the most ambitious students — but can you imagine going through the process while serving in Afghanistan as a combat medic for the U.S. Army?

“Sonia Patota, the off-campus program coordinator at MWCC, was super helpful while I was overseas,” Jessie said. “I was trying to have my friends from home fax paperwork over to her because my access wasn’t that good. She was so patient and helpful.”

As part of her training with the Army, Jessie earned her emergency medical technician (EMT) license. She also became an expert on how to respond to disaster scenarios. Her deployment to Afghanistan left a lasting impression on her, one that she hopes to put into practice as the new director of health services at Elms College.

“The military prepared me for emergency response and safety precautions here on campus, both for the students and the rest of my staff,” the Dudley, MA, resident said. “I’ve already worked with Public Safety on disaster preparedness.”

Making the Move to RN-BS

When Jessie returned home from overseas, she started her journey in the Elms RN-BS program, taking classes on the MWCC campus every week. She also continued to build her expertise as a nurse, working part time in the health center at Elms. The flexibility of the RN-BS program made all the difference to her.

“It’s flexible, so I could still work part time. A lot of the girls in my cohort worked full time,” she said. “Considering all of the satellite campuses now, you can have your pick of where you want to go.”

Like many nurses who choose to advance their career by earning their bachelor of science (B.S.) degree, Jessie carefully weighed how her newfound academic schedule would impact her time with family.

“It’s completely doable for somebody who’s trying to do something else with their life, like work or have a family,” she said. “Mount Wachusett is my hometown area, and I was able to see my nana every Friday while still being able to go to class.”

Health in the 21st Century

As she begins her tenure as the director of health services at Elms, Jessie has big plans for leading the health center into the future. Whether she’s bringing digital technology into the center’s operations or researching population health issues, students still come first for her.

“My number one priority is the students,” she said. “I have a lot more on my plate now, but students still come first.”

“I’m hoping that we can still take care of students in the capacity we have been, if not better,” she added.

For nurses considering going back to school for their B.S. degree, Jessie highly recommends the Elms/MWCC RN-BS program.

“Don’t doubt yourself. A lot of people can come up with any excuse not to instill a change in their lives,” she said. “If you can break that cycle and apply to the RN-BS program, you can still live your life the way you’re living it, and further your education, too.”